The push for international students to make Nova Scotia their home

Victoria Jin was looking for more than just another academic degree when she chose to continue her education by living in Canada.

After her undergraduate schooling in her home country of China, the business major set out to find a place where she could get the complete Canadian experience.

She was searching, she said, for the type of connection many Chinese students miss when they simply flock to established Asian communities in B.C. and Ontario.

"I really wanted to go to a place to study where I could experience a , pure Canadian culture," she said. "When I find Nova Scotia, I like it ... It doesn't have a big Asian because I want to my English."

Jin was soon armed with an MBA from Cape Breton University and a new-found affection for Nova and has moved to Halifax for a new government-funded program aimed at keeping international students in the province.

Stay in Nova Scotia is an initiative started by the non-profit group EduNova to help address the province's declining population and gaps in the workforce. Fifty international university and college graduates were selected to participate. 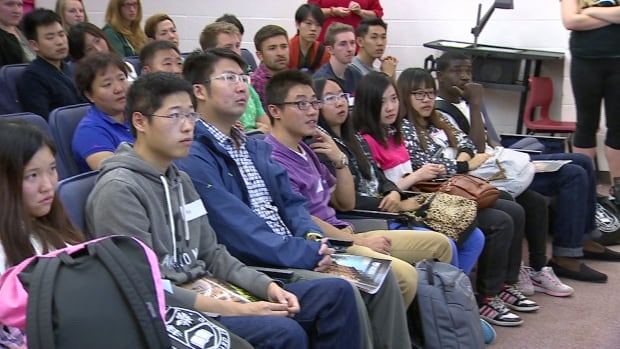 Part of the solution to Atlantic Canada's problem is to attract more foreign students, according to the director of research for the Atlantic Provinces Economic Council. (CBC)

The first cohort recently completed the program and Michael Hennigar, director of marketing and recruitment with EduNova, said it is on track to meet its goal of keeping 80 per cent of the class in the province for a year of work after graduation.

"Thus far, we have had good success," said Hennigar. "More than 50 per cent of them have been able to secure full-time employment in their fields of study, just post-graduation from the program."

The initiative offers a range of services to students, such as help finding employment and developing professional networks, mentorships and work placements.

While almost three-quarters of people aged 25-29 in Atlantic Canada have a post-secondary certificate, diploma or degree, their employment rates still lag youth elsewhere in Canada, according to recent research by the think tank Atlantic Provinces Economic Council.

Young people in the Maritimes also earn about $3 less per hour than the national average for their cohort. APEC said there continues to be net from the region, and those who leave end up being paid more than those who stay.

APEC's director of research, David Chaundy, points to international student retention as part of the solution to the outmigration problem.

"They've got strong reasons why they might be attractive for an employer looking to retain them in the market," said Chaundy.

Jin credits  Stay in Nova Scotia program for the success of a pop-up clothing store she opened with a classmate last winter.

The startup experience helped pave the way for the full-fledged permanent restaurant the pair opened two months ago.

"Halifax has really, really, big potential," she said. "This is a capital city without Chinatown. This is a city with six universities ... It makes sense, this city is going to be better."

While the 27-year-old entrepreneur does miss her family back home in China, she has no plans to return there permanently.

"This city is full of opportunities and big potential. This is the reason why I want to settle down here," said Jin. "I've got big hope."

Jin said she's not stopping with a restaurant. She plans to open the pop-up clothing store once again this winter and also has plans for other businesses in the future.

It's not all about her own success in business. Jin also hopes that more graduates, international and domestic, will keep an open mind about where to settle and take another look at what Nova Scotia has to offer.

"They are thinking there are not a lot of opportunities, but they are wrong. Because it's only a stereotype. If you take a look at the local market ... and don't give up, keep going, you're going to find something you really want."