Jobs and wages: The winners and losers through 2 Alberta recessions

It's been a wild decade in Alberta.

We're used to booms and busts in this province but, even by our standards, the past 10 years have been a roller-coaster — down, then up, then down again. And now, sort of back up.

We're just starting to emerge from the grips of the latest recession, so the previous one may seem like a lifetime ago. But it took no small toll on Alberta, either. Some industries saw heavier job losses during the 2009 downturn than in this most recent one. And isn't that what most people care about when it comes to the economy?

So that's what we're going to explore here. Through 120 months' worth of payroll data, we're going to show you how jobs in Alberta's biggest industries have fared over the decade we've just been through, from the global financial crisis to the golden era to the oil-price collapse.

These aren't personal stories. This is the 30,000-foot view. But contained in the volumes of data are real people's lives. Each downward trend brought with it a devastating blow for hundreds — sometimes thousands — of families. Each uptick, meanwhile, brought new hope.

Check it out for yourself below. But be prepared: it's not a light read.

We hope you like graphs. Because we've got plenty. And they're interactive. Tap on them or roll your mouse over them to pull out more detailed information.

But before we get to all the nifty stuff, just ahead is an explanation of where we got all the numbers. If that makes your eyes glaze over, just skip to the first graphic.

What you should know about this data

The data source is Statistics Canada's Survey of Employment, Payroll and Hours.

This is different from the Labour Force Survey, which is what you hear about every month when the latest unemployment rate is reported. That data comes from a traditional survey and, as such, it offers a fuller picture of overall employment but contains quite a large margin of error.

The payroll survey, by contrast, includes all businesses with at least one employee who has been issued a T4 slip. As a result, it tends to be more precise in what it measures.

"The quality of that data is better," said Trevor Tombe, an economist at the University of Calgary. 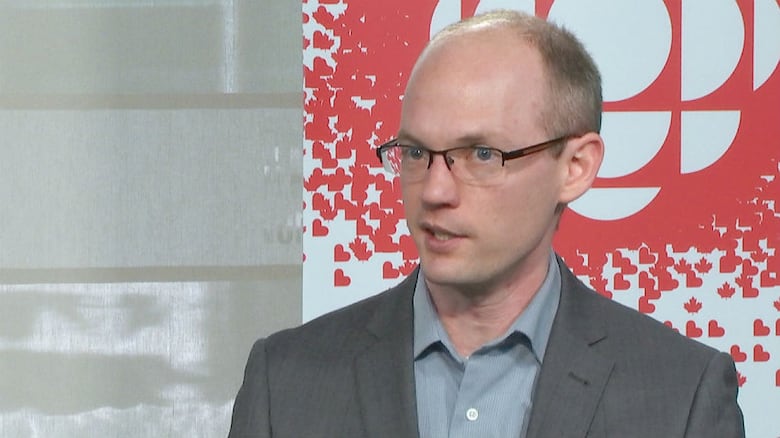 Trevor Tombe is an economist at the University of Calgary. (CBC)

Another advantage of the payroll data is it tells us how much money people make on an actual basis, including overtime.

The downside is that this method doesn't include people who are self-employed. So while it counts about two million total payroll jobs in Alberta, overall employment is estimated closer to 2.3 million.

The real takeaway here is that the payroll data counts jobs not people.

So, for example, it includes jobs held by people who live in other provinces but work in Alberta for part of the year. It can also double-count jobs in some cases. If someone works as an insurance adjuster during the day and a bartender at night, that counts as two jobs, even though it's one person working both of them.

With all that in mind, let's take a look at the top 10 industries in Alberta. These industries account for 75 per cent of the payroll jobs in the province. That's 1.5 million paid positions.

The numbers are current up to November 2017, the most recent month for which data is available.

This is the largest of the 20 broad categories that Statistics Canada studies, but it ranks second-last in terms of earnings.

It includes the shops you find in malls, as well as more specialized vendors like gas stations, car dealerships and home supply stores. Basically, any place that sells merchandise or provides after-sales service falls under this category.

The number of jobs in retail trade has been stagnant for the past few years and still hasn't recovered to pre-recession levels.

The industry weathered the latest recession better than the previous one, however. Jobs in retail trade declined by about four per cent in the wake of the 2008 financial crisis.

At the same time, however, earnings increased during the 2009 recession. That growth continued for most of the decade, but has levelled off in the past few years.

This is now the second-largest source of jobs in Alberta, but it ranks 15th in terms of earnings.

Employers in this category include large institutions like hospitals and nursing homes, as well as smaller providers of social services, which can include everything from daycare centres to food banks.

Growth in both jobs and earnings has been steady. There are now about 40 per cent more jobs in the field compared with a decade ago, while earnings are about 35 per cent higher.

Earnings were relatively flat during the last recession, however, but have started to edge upward again in the past year.

Future growth in earnings will likely be curbed by a contract that the United Nurses of Alberta is recommending for approval by its roughly 30,000 members. That deal includes a two-year wage freeze.

This is now the third-largest source of jobs in Alberta, but it used to be in second place not too long ago.

Construction jobs boomed in Alberta from 2011 to 2014, overtaking health and social services for the No. 2 spot. But the latest recession hit hard.

The industry is still down about 30,000 jobs from its peak. Earnings have also fallen at the same time, making construction one of the few industries to suffer a double-whammy in the past few years.

Between now and 2026, the industry association expects slower growth and a higher unemployment rate than construction workers have become accustomed to in the past. It's part of what it predicts will become a "new normal" for Alberta.

Construction still ranks at the high end of the wage scale, though, sitting in fifth place out of the 20 industry categories.

This category includes most types of jobs in the hospitality industry.

So that means everything from hotels to bed and breakfasts to RV parks and campgrounds. It also includes restaurants, bars, caterers and specialty food services.

This is the lowest-paying industry out of the 20 that Statistics Canada studies, but earnings have been on the rise recently.

The recession hit one sector of this industry particularly hard: full-service restaurants.

These are the types of venues where you sit down and a server takes your order and brings you your food. During good economic times, they typically do more total business than the province's limited-service restaurants — fast food joints, coffee shops and the like.

But that changed during both the 2009 recession and the 2015-16 recession, as sales at full-service restaurants fell while sales at limited-service establishments continued to grow in spite of the downturns.

Most types of educational employers fall under this category. So that means elementary and secondary schools, as well as post-secondary institutions such as universities and colleges.

Earnings growth has exceeded job growth in this field for most of the past decade, but that's started to change recently.

The levelling off in wages is likely to continue as the roughly 44,000 members of the Alberta Teachers Association have agreed to a two-year contract with no pay raises.

As you'll see from the graph below, this sector's fortunes rise and fall with the economy as a whole.

Manufacturing jobs plunged during both the 2009 and 2015-16 recessions. Even today, after some strong recent growth, they remain significantly below their 2007 levels.

All told, the manufacturing industry lost about 27,000 jobs between December 2014 and November 2016. The heaviest losses came in machinery production and metal fabrication.

Earnings have also been on a downward trend, after reaching their peak in early 2015.

Job numbers have been on the rebound for the past year, however.

Some of the biggest gains have come in meat processing and the production of machinery, according to a recent report from Alberta Economic Development and Trade.

This is a broad category of employers that are "almost wholly dependent on worker skills," according to Statistics Canada's official definition.

It's also important to note that there are far fewer payroll jobs in this sector compared to the total level of employment measured by Statistics Canada's Labour Force Survey. While the sector ranks seventh in terms of payroll jobs, it's fourth in overall employment.

That suggests many people working in this field are self-employed and not captured in the data we're looking at here.

Both earnings and wages fell sharply during the latest recession and there's been little growth in either since.

Most types of federal, provincial, municipal and First Nations government workers are captured in this broad category.

The number of government jobs peaked in June 2016 and has been relatively flat since then.

Earnings have seen relatively consistent growth over the past 10 years and are nearly 40 per cent higher than they were in November 2008.

This is the industry that is most often associated with Alberta's economy, so it may surprise you to learn it's only ranked ninth in terms of payroll jobs.

It ranks first, by a healthy margin, in terms of earnings, however.

It will come as no surprise that the industry was hit especially hard during the last recession.

It's important to note that not all oil-and-gas jobs are included in this category.

Statistics Canada says employees working in different branches of large companies are often classified into different subsectors, so engineers and geoscientists could fall under the professional services category, while workers helping to build a new oilsands operation could fall under the construction category.

The final entry on the top-10 list is an industry category that includes nearly anyone who's in the business of moving or storing things.

This sector lost 6.4 per cent of its workforce in 2009 — roughly 6,000 jobs — and fared worse during that recession than the most recent downturn.

The industry has been on the rebound in the past year, reaching its peak in both jobs and earnings this past summer.

Putting it all together

The worst of the latest recession may now be over. But, as we look forward to where we're going next, it's important to take stock of where we've been.

We hope these charts have been helpful in that respect. But we recognize it might be a little disjointed.

To help tie it all together, we have just one more for your consideration.

The charts above show how various industries have fared, relative to where they were a decade ago.

But to see all of the industries together requires one very long, somewhat messy chart, which you can see below.

You'll need to scroll. (And a reminder: You can tap on the chart or roll your cursor over it to see more detailed information.)