Alberta posted the biggest dip in the number of people collecting Employment Insurance benefits in May compared other provinces, according to figures released Thursday by Statistics Canada.

In May, 72,000 people were getting EI benefits in Alberta, down 7.2 per cent from the previous month.

"EI recipients in the province have been declining since December 2016, coinciding with improved market conditions after the downturn in oil prices," Statistics Canada said. 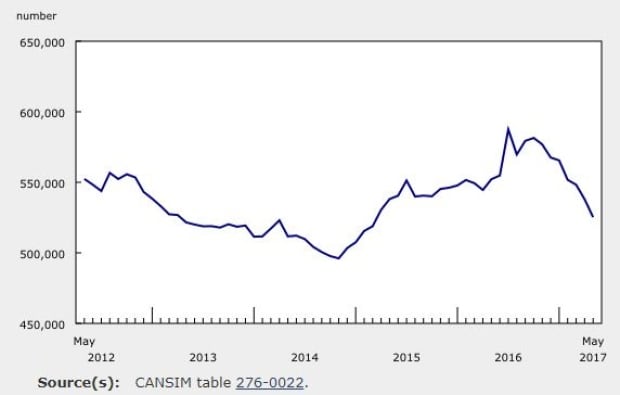 Nationally, the number of Canadians getting regular EI payments has been declining. In May, there were 525,300 people receiving benefits. (Statistics Canada )

In Edmonton, the number of EI recipients was down 2.5 per cent since last year, with 24,600 collecting benefits in April.

From May 2016 to May 2017, the number of EI recipients across Alberta declined by 11.1 per cent — the first year-over-year dip since November 2014, when the energy sector slump began.

Statistics Canada noted the size of the decline is partly due to a spike in beneficiaries last spring caused by people having to leave their jobs as they fled the wildfire in Fort and their subsequent return to their jobs.

More than a third of the decline in beneficiaries year-over-year to May occurred in the census area of Wood Buffalo, which includes Fort McMurray.

Nationally, the number of EI recipients was down 4.9 per cent from a year ago, led mostly by decreases in Alberta, and Ontario, Statistics Canada says.

In May, 525,300 people collected regular EI benefits across the country.

Published by The Star