SideDoor ministries had a lot to celebrate this weekend.

The organization celebrated the recent two-year anniversary of Hope's Haven, a transitional housing and emergency shelter program for youth, and announced the launch of two new programs: Housing First 4 Youth and HELP4U, an employment program for youth.

On July 10, three youth will be placed into permanent housing. The plan is to place 10 youth within the next nine months.

"It will be similar to Housing First for Families," said Iris Hamlyn, executive director with SideDoor Youth Ministries.

Iris Hamlyn, executive director of SideDoor ministries, says there's a plan to get 10 youth off the streets and into permanent housing within nine months. (Walter Strong/CBC)

"It will be housing plus support. So youth will be moving from our facility — out of transitional housing — to permanent housing, and we'll be supporting them."

But there more at risk in the city who do not use the program.

"There's a lot of youth who don't come to our shelters. They couch surf or have precarious housing in town."

The program has $50,000 in seed but will be looking for more funding. 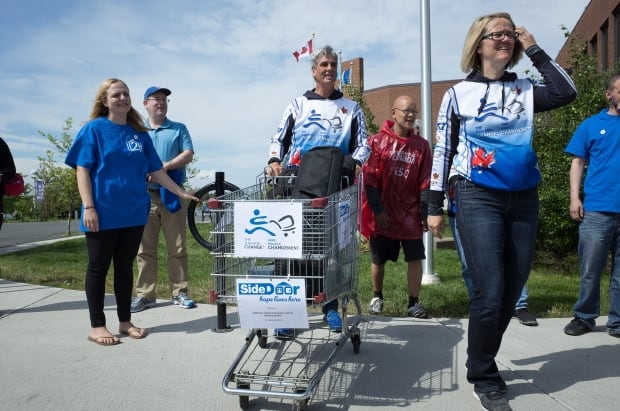 Joe Roberts, , and Marie Roberts, right, Yellowknife on the weekend as part of the Push for Change campaign to end youth homelessness. (Walter Strong/CBC)

The Push for Change

To help mark the day on Sunday, the ministry hosted The Push for Change, a national fund-raising campaign to raise awareness of youth homelessness, and the will to eliminate it.

Joe Roberts — better known as the 'Skidrow CEO' — is the face of the campaign. Roberts is pushing a customized shopping cart across the country and has already raised more than $500,000. He's pushed the cart more than 7,000 so far.

Roberts lived on the streets in Vancouver 25 years ago, pushing a shopping cart around the city's downtown collecting cans for cash. He turned his life around at age 25, and within ten years, he had returned to school, gotten a degree, went to work in the booming online sphere — and made his first million dollars.

Now, he's the executive director of Push for Change, as well as a motivational speaker.

"I had made every mistake that a young person could make," Roberts said of his time on the streets as a homeless drug addict. 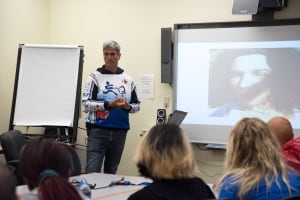 Joe Roberts, executive director of the Push for Change, presents his life story in Yellowknife on July 2. (Walter Strong/CBC)

"I am here by the virtue of organizations like Side Door and a forward thinking country that invests in people when they begin to slip, to provide that safety net."

Roberts said he would not have made it off the streets if it were not for social and community support at critical junctures in his life.

"I'm here because the community invested in me," he said.