Many Indigenous families not applying for Canada child benefit: documents

Many Indigenous families on reserves and in the North have not been applying for the Canada child benefit because they are either unaware of the program or they are not filing their income taxes — a requirement for eligibility in the program.

According to documents CBC News obtained under the Access to Information Act, federal officials are searching for ways to get more Indigenous families to take advantage of the program, but the task is proving difficult.

"There is some concern that the tax filing may act as an impediment to uptake, particularly among the on-reserve population," reads an August 2016 Employment and Social Development Canada briefing note.

"While the research will help to identify communities where benefit uptake is low, efforts are also under way to better understand and address the barriers to participation."

Asked to comment on the scope of the problem, the office of the minister responsible for the child benefit, Jean-Yves Duclos, issued a statement, which reads in part:

"We know that the level of poverty among children living on reserves is higher than elsewhere in Canada and that the [Canada child benefit] would have a very positive impact for those families and their children."

First announced in the Liberal government's 2016 budget, eligible families with children under the age of 18 began receiving the tax-free monthly payments in July 2016.

Families with higher incomes receive progressively less, until the benefit phases out entirely for the richest households. The Canada Revenue Agency created an online calculator to help families figure out what they are eligible for.

A mistrust of government

From July 2016 to June 2017, Employment and Social Development Canada says, the government paid out more than $23 billion in benefits to 3.6 million families.

Prime Minister Justin Trudeau has been touring Central and Eastern Canada to promote the program which hit its first anniversary Thursday, but despite the fanfare, the Canada child benefit does not appear to have caught on with Canada's Indigenous population.

"I would think theoretically, [the Canada child benefit] would make a difference [to Indigenous families living on reserves], but I haven't heard of large numbers of families being able to access the benefit to date," Cindy Blackstock, executive director of the First Nations Child and Family Caring Society of Canada, told CBC News.

'People don't know about it. And don't know how to access it, and don't necessarily trust the Canadian government.'- Cindy Blackstock

Although the government wants to increase the number of families who file taxes, there's also sensitivity about how First Nations communities might interpret such an initiative, even if it is aimed at allowing more families to obtain thousands of dollars in benefits.

"Due to a number of complex factors, most notably the mistrust of the federal government and its programs, resistance to taxation and the expectation of parallel programming for Indigenous Peoples, the [Canada Revenue Agency] faces many challenges in trying to fulfil these responsibilities," reads an agency document CBC News obtained through Access to Information. 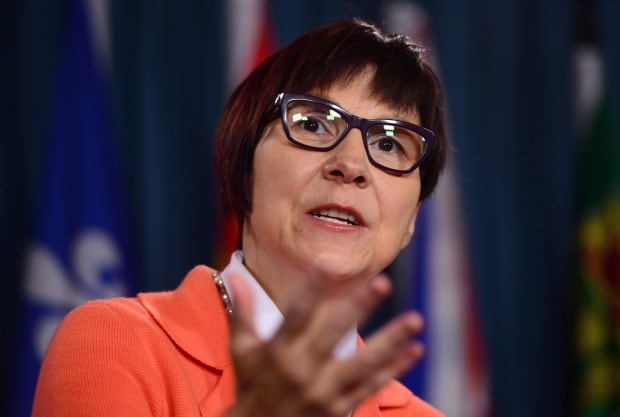 Cindy Blackstock, executive director of the First Nations Child and Family Caring Society, says many Indigenous families are unaware of the benefit or how to access it. (Sean Kilpatrick/Canadian Press)

"You don't want to be seen overstepping First Nation determination."

Working more closely with Indigenous organizations such as the Assembly of First Nations to reach communities is one of many solutions discussed in the briefing material. There's also recognition of the need to do a better job of publicizing the and producing that material in Indigenous languages.

"People don't know about it. And don't know how to access it, and don't necessarily trust the Canadian government," says Blackstock.

Still, it all comes down to filing taxes, which allows the government to determine which families are eligible. In its document entitled Engaging Indigenous Peoples Action Plan 2016-17, the CRA says it would like to increase the tax filing rate in Indigenous communities by "at least 10 per cent by the year 2020."

But this kind of initiative sits uneasily with the Assembly of First Nations, which says in its statement to CBC News that "relying on tax returns is not effective."