Mohammad Basem Aldehneh never thought he'd be the owner of a restaurant — it just wasn't part of his plan.

The Syrian refugee, now living in Windsor, was an engineer for 17 years before arriving in Canada more than a year ago.

"We can't go back to Syria ... there's a war going on," he said. "So, we decided to come to a safe place with my family, so we can live in a safe area. Canada is the best place for that."

With the dangers of war left behind in his homeland, Aldehneh tried looking for work. After giving up on finding an engineering job, he decided to start a business. But being a refugee entrepreneur comes with its own set of challenges.

Aldehneh eventually reached out to a friend who owns a Le Ballon restaurant franchise in the Middle East. The two hatched a plan to open up a similar shop in Windsor, which serves classic Middle Eastern dishes such as shawarma and falafel. 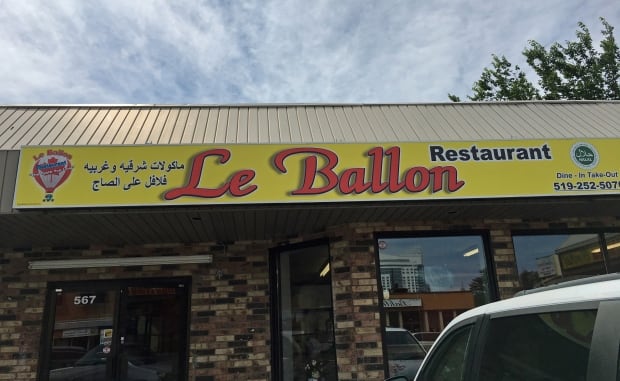 Mohamad Amer  joined Aldehneh in Windsor and the two leased a space at 567 Wyandotte Street East, did their own renovations and eventually opened the doors to customers.

"We start to work, we start to earn money, we start to do something. Because we can't live here, without work," he said, sitting at a table in his small Mediterranean restaurant.

But there were a few challenges along the way as there are for most refugees in Canada. Many of them are unable to apply for funding or grants because they don't have a permanent residence card.

The New Canadians Centre of Excellence says newcomers are faced with a "unique set of obstacles" in addition to the typical difficulties of starting a new business.

"One of the main challenges is in the area of finances because a lot of clients haven't had the time to build up a credit history or have that long-standing employment income to show," said Alanna Oddoye, business development advisor with the of excellence.

Language barriers and a lack of connections and contacts in the community only add to the challenges, she explained.

Knowing the difficulties of finding work in a new country, Aldehneh has hired other refugees in his shop as a way of helping others settle into Canada.